Kan jam is a sensational flying-disc sport that is taking people of all ages by storm. The distinct look of the yellow flying disc and large black cans is unmistakable. Similar to Frisbee golf and Frisbee football, this game can be played in parks at the beach, or anywhere with enough open space. The object of this game is to throw the disc so that a person, called the “deflector,” can try to deflect it with his hand to fall in a large barrel which is called a kan. The game is played with two teams standing on opposite sides of the playing ground. Each team of two players has a kan near them that they will try to throw or deflect the disc into during their respective turns. The teams will then take turns with one person throwing the flying disc as another person from the same team tries to deflect it. Teams may gain points from hitting the side of the kan with the disc, throwing the disc into the kan, or deflecting the disc to hit the kan. They get various points for each of these different scoring methods, and the first team that has 21 points wins the game. 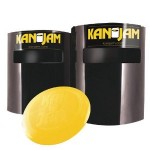 Kan jam was created by Charles Sciandra and his partner Paul Swisher in New York during the the 90s. The idea came to Sciandra when he and some friends were playing with a flying disc in the park, and someone suggested trying to throw the disc into a garbage can. The idea had been formed, so all that was left was to develop the game. After appropriately developing kan jam to make it a unique flying disc game by making an “instant win” slot in the kan, they got it patented. Kan jam entered the market in 2005, but it was during the time that the two men offered it to schools in their area for fitness programs that the product really took off. After perfecting the game and product, they moved to a larger facility after selling 14,000 units in 2007. Today, the sensational game is played in every state in the U.S.A and in several other countries. In only a few years, the game that Sciandra and Swisher had created spread like wildfire, gathering somewhat of a cult following of fervent kan jam athletes. 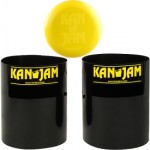 The culture and community surrounding the game is enormous, stretching across cultures, countries, and social statuses. In addition, there are several official tournaments such as the Klassic and the World Championship, which are both fairly new, but they have revealed some true talent in the game. There are also a wide number of leagues and smaller tournaments being formed by players. Kan jam is played for leisure, as a sport, and also as a fitness activity. A number of schools have already adopted kan jam into their physical education programs because the game is easy to learn, easy to play, and a good physical activity. Fans of the game can buy shirts and other products from the official site, and some individuals have done kan jam car wraps. Whether kan jam will pass like many other game trends before it or continue to thrive as a beloved game for generations to come is something that will only be told by time. 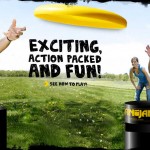